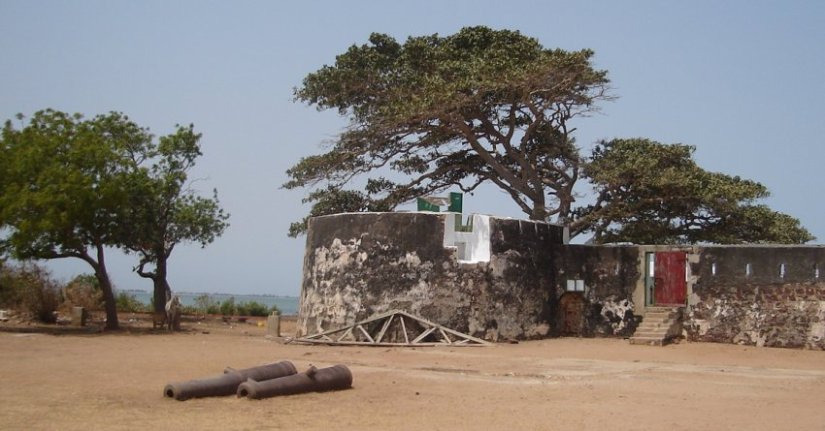 …Continuing from part one.

The calls for help from the British authorities in Sierra Leone and the French in Senegal were heeded to, first by the French. They dispatched Commandant Louvel (Louvel Square in Banjul is in his honor) from Goree aboard the man-of-war Bordelaise. His task was to fortify the defenses of Bathurst. As part of the fortification of Bathurst,

all, who could carry arms, were drilled and enrolled in a militia, even the native women and children carried stones for the erection of the new fort. Mrs. Moister and her school girls at the Weslyan Mission were busily employed in making sandbags for the erection of movable batteries. Sentinels were also appointed to keep a strict look out, that they might give an alarm in case the enemy should attempt to land on the island.

The people of Niumi clearly had no intent of attacking Bathurst because Commandant Louvel’s arrival was on September 8th, 1831; over two weeks since the people of Essau pursued the colonial forces from Essau into the river while they scrambled on to their boats. If they had any intention of following up their success, they had enough time to storm Bathurst before it was more fortified. It was apparent their only goal was to keep the British out of the Ceded Mile.

After Bathurst was fortified, on September 15th, Commandant Louvel led the Bordelaise and a few boats, accompanied by men of the West India Regiment and the local militia across the river to Barra point to recover that base, they were unsuccessful as the people of Niumi were “strongly entrenched and could not be dislodged by artillery fire.” Commandant Louvel could not land on that occasion and lost a few men when one of the attacking vessels had a gun powder explosion on board, he returned to Bathurst. Upon arrival at Bathurst, he sent further appeals for reinforcement to Senegal. It appears the people of Niumi were more resilient than anticipated and it will require a much larger force to subdue them.

On October 10, 1831, the French Governor himself, Renault St. Germain responded in person with a contingent of “sailors and marines” but he waited for the British reinforcements to arrive from Sierra Leone before attacking. That reinforcement would arrive on November 5th, and two days later, on November 7th, 1831 the joint British, French and local militia forces headed for Barra point.

Under cover of bombardment, they landed but faced fierce hand to hand bayonet combat with the people of Niumi. They were finally subdued from Barra point and they retreated to Essau. On November 17th, the contingent attacked Essau; “the place was bombarded with some small field pieces but the enemy returned a vigorous fire. The artillery did little damage and after five hours’ fighting, ammunition began to run short.” The commanders noticed that the enemy was making maneuvers that looked like they were attempting to encircle the attackers. “The order was thereupon given to fall back to Barra Point”.

The natives’ stronghold at Essau could not be taken yet again, the British and French combined forces had to retreat to Barra Point and wait for more reinforcements. On December 7th, further reinforcements arrived from Sierra Leone but another attack on Essau was not renewed.

The war had taken its toll at this point and at the same time as they were fighting off the Europeans, Maba Jahu Bah and his forces had crossed over from Badibou and invaded Jokadu which was a district of Niumi. “This attack from the rear had drawn away a large number of men and it was felt that they could not hope to repel another attack upon Essau.” This war from two fronts and from two enemies led to peace overtures with the stronger of the two enemies. “On Jaunary 5th 1832, a convention was signed at Juffure. Burunghai Sonko and his chiefs publicly declared their sorrow for (what the British considered) the outrages they had committed.

It was after this final convention that they agreed to give up the Ceded Mile. With the foregoing, we can conclude that it was reluctantly done. But in typical colonial exploitative fashion, the British had to cash in on the vulnerability of the war wary people of Niumi and coerced the king and his chiefs to agree “that the limits of that territory (Ceded Mile) should be extended to the Atlantic Ocean.”

So ended what has come to be known as the Barra War. It had lasted four months, during which time all trade had been brought almost completely to a standstill. The enemy’s casualties are not known, but the war had cost the British and French some fifty lives as well as thrice that number wounded. The French demanded forty thousand francs for the cost of their expedition.

Although the loss of lives were lamentable, to the British, some good emerged from that war; “it had at least been shown that this fifteen-year old community (Bathurst) of so many mixed races and origins was wholeheartedly British.”

Even though some of their names may be lost to history, the progeny of those gallant men of Niumi that fought to retain their birthright, walk among us today.